I want you to close your eyes for a second and picture Meg Ryan in that famous diner scene from When Harry Met Sally.  She faked an epic orgasm that made cinematic history.  This is, unfortunately, a scene that is repeated in many bedrooms around the world. Up to 90% of all women fake orgasms.  Statistically, women find it harder to orgasm in a casual relationship compared to a committed relationship, but even those in a committed relationship are faking orgasms more often than men would like to believe.

Did you know that only 18% of women orgasm with vaginal sex? And that only 14% of women ever talk to any of their physicians about sex? About 40% of women suffer from sexual dysfunction of some sort. They fantasize about having a Meg Ryan moment but precious few, clearly, do anything proactively to achieve it.  There are psychological and stress-related reasons as to why women may not orgasm but we will focus on the anatomical reasons for this week’s blog. 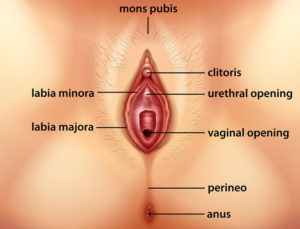 Let’s start with a quick anatomy lesson. The clitoris hides under a hood. Below it is the urethral opening that you urinate from. At the other end from the clitoris is the actual vaginal opening. Most women think that the G-Spot is their one and only chance at a great orgasm but that little clitoris hiding under its hood outside the vagina is where the magic happens for the overwhelming majority.

An important factor in your ability to orgasm is the distance between the clitoris and the vaginal opening. The shorter the distance, the greater your chances of achieving orgasm. Now you see why sex on your back in the missionary position does not usually work. It simply does not stimulate your clitoris. Positions such as with the woman on top or with more direct clitoral stimulation allow women a much better chance at orgasm.

Another interesting concept I would like to introduce you to is that of clitoral size. We often think of the penis in terms of size but never the clitoris. Women with a smaller clitoris have a harder time achieving orgasm. Size does matter after all, and not just for men.

Here is something that I bet you did not know. The clitoris has about 8000 nerve endings while the penis only has about 4000. You see how much fun men have with their 4000 nerve endings. Think of what you can do with 8000.

Too many women have accepted the idea that men have all the fun in the bedroom.  Ladies, that changes right here, right now. I present to you the O-Shot®. Your clitoris is now front and center. This magical little spot with its 8000 nerve endings is about to have its moment of glory. Let’s start with the very first question in your mind. “What is an O-Shot®?” you ask. It is literally the Orgasm Shot.

“How is an O-Shot® done?” you ask next. We take blood from your arm just like any other blood draw you have ever had. We apply numbing cream down under, and while you are numbing we spin your blood down to platelet-rich plasma (PRP) in our FDA-approved centrifuge. We then take it a step further and convert it into platelet-rich fibrin matrix (PRFM) which has more growth factor, and therefore stimulates more stem cells.

We inject it directly into your clitoris and your vaginal wall. We inject PRFM into your clitoris so that the additional growth factor stimulates more stem cells and those 8000 nerve endings we discussed earlier. This makes your clitoris bigger, and more sensitive, and the vaginal tissue healthier as a whole. This therapy essentially makes the vagina and clitoris younger by activating stem cells.

The O-Shot® even helps with urinary incontinence. I ask my patients about this and more often than not, they deny having urinary incontinence. I always probe further and ask if they experience urinary leakage when they cough, sneeze or exercise, and the answer is often yes. Vaginal childbirth certainly increases your chances of suffering from it. You may suffer from mild, moderate or severe urinary incontinence but realizing that you do is the first step towards healing and recovery. We can perform the O-Shot® on you to relieve your suffering, and even take it a step further with our Candela fractional CO2 laser (CO2RE). The O-Shot® can even potentially help women who suffer from dyspareunia or painful sex. It leads to more desire as well as stronger and more frequent orgasms. The O-Shot® also leads to better natural lubrication and a tighter vaginal opening. It helps with chronic interstitial cystitis and chronic mesh pain.  The O-Shot® even helps with lichen sclerosis  which is  the chronic inflammation, thinning and tearing of the genital area.

“How much does an O-Shot® hurt?” is one of the questions I am asked most often. Well, here is some great news. I am one of the few doctors in the world actually certified as a provider of the vampire series of treatments including the vampire facial®, vampire facelift®, vampire scalp treatment® (for hair loss), vampire breast lift®, vampire wing lift® (for labial rejuvenation), the O-Shot® (Orgasm Shot for women) and the P-Shot® (Priapus Shot for men, which helps with erectile dysfunction, premature ejaculation, and more). I have been personally trained by Dr. Charles Runels, the inventor of the procedures. I have a technique that leads to an O-Shot® that is practically painless and truly effective.

“How long does an O-Shot® take to work?” is another common question. It takes about 6 to 8 weeks because you are rebuilding and rejuvenating yourself from the inside out. “Do I need more than one O-Shot®?” is the natural next question. More is better. If you have more than one O-Shot® it is more effective than a single O-Shot®, but you don’t have to have two O-Shots® to see results. You cannot overdo rejuvenation, and an O-Shot® is rejuvenating your vaginal and clitoral area naturally. Your body has in it what it needs to heal and rejuvenate itself. “What is the downtime after an O-Shot®? When can I have sex again?” is something every patient asks. There is no downtime. The O-Shot® is administered with a tiny needle and you can even have sex the same day.

After reading this blog, you now know that you no longer need to fake orgasms or suffer through a lackluster sex life..  You no longer need to live with urinary incontinence and a host of other vaginal issues.  Life is too short for that. Please email me at info@bawamedical.com for more information about how the O-Shot® and vaginal laser therapy can change your life.  Thank you for stopping by.  Till we meet again.